The Smithsonian uploaded this today pic.twitter.com/S6lWvgm0Pw

btw, @fxshaw, if Microsoft wants to rebrand with my new logo, I'm sure we can come to a suitable arrangement. http://cdn.arstechnica.net/wp-content/uploads/2015/02/cool-microsoft1-300x150.png … 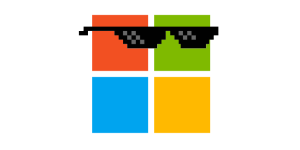 Raising the bar on web uploads

2010 Apr 15, 1:52Gmail now allows you to drag and drop files to make them attachments. This is HTML5 drag and drop plus file API. Awesome

2009 Nov 20, 2:31YouTube now does automatic captioning in some cases and automatic timing in all cases. Automatic timing lets you upload a transcript with a video and YouTube will do speech to text and figure out when the various parts of the transcript need to be displayed.

2009 Aug 14, 3:55The government program PACER is an online archive of court records and even though the documents are public domain, PACER charges access to them ostensibly to pay for PACER. This plugin uses the Internet Archive as a kind of free intermediate cache, rewriting the PACER HTML to reference the free Internet Archive versions of the documents when available and uploading PACER documents to the IA cache when you download one it doesn't yet have.

2009 Jul 27, 5:34"This specification provides an API used to prompt the user with a file selection dialogue and obtain the data contained in files on the user's file system."

2009 Apr 20, 3:37Web service that hosts avatar images for things like blog comments. The image is ID'ed by a hash of the user's email address. Auto generated or if the user signs up, the image can be whatever they upload. Lots of plugins for different blogging platforms.

Photosynth of my Office

I've had a little fun messing around with Photosynth, a Microsoft research project turned into a Live service. You upload a bunch of photos from around the same area and it makes a 3D panorama out of them. For instance, here's National Geographic's photosynth of the sphinx and pyramids in Egypt. Messing around with this I've made one of half a vase of roses, and a larger photosynth of my office.