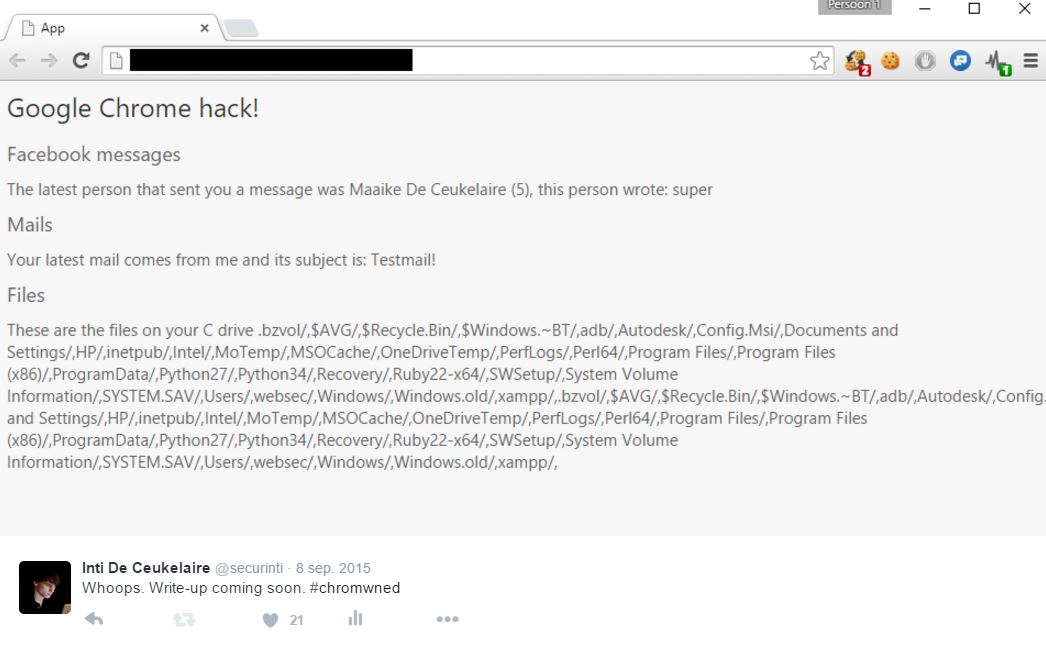 Very helpful site to determine which channels you're likely able to receive OTA based on your address or zip code: http://gomohu.com/xbox/

Blogged: How I got XSS’d by my ad network http://ift.tt/1HsCP4K

Or from GitHub's POV, how else can you use this XSS? Example: Open a new window with info on howto subvert particular censorship. What else?

The level 4 web application lets you transfer karma to another user and in doing so you are also forced to expose your password to that user. The main user page displays a list of users who have transfered karma to you along with their password. The password is not HTML encoded so we can inject HTML into that user's browser. For instance, we could create an account with the following HTML as the password which will result in XSS with that HTML:

Code review red flags in this case included lack of encoding when using user controlled content to create HTML content, storing passwords in plain text in the database, and displaying passwords generally. By design the web app shows users passwords which is a very bad idea.

This web app does a much better job than the level 4 app with HTML injection. They use encoding whenever creating HTML using user controlled data, however they don't use encoding when injecting JSON data into script (see post_data initialization above). This JSON data is the last five most recent messages sent on the app so we get to inject script directly. However, the system also ensures that no strings we write contains single or double quotes so we can't get out of the string in the JSON data directly. As it turns out, HTML lets you jump out of a script block using no matter where you are in script. For instance, in the middle of a value in some JSON data we can jump out of script. But we still want to run script, so we can jump right back in. So the frame so far for the message we're going to post is the following:

…what it does is, essentially, respond to DNS requests for CNAME, MX, TXT, and NS records with Javascript code. … how about SQL injection?

Summary of one of the Chrome security exploits from pwn2own.  Basically XSS into the chrome URI scheme which gives access to special APIs.

2010 Mar 31, 7:54"Summary: Exploring cross-domain threats and use cases, security principles for cross-origin requests, and finally, weighing the risks for developers to enhance cross-domain access from web applications running in the browser."

2010 Mar 10, 5:19Covers same origin policy and how it applies to different HTML and HTTP features.

2010 Jan 27, 9:56Some of the new security features in Chrome: XSS filter, HTTPS only, HTML5 origin header, and HTML5 postMessage function.

2009 Nov 17, 6:52"What if there was a backwards compatible way to transfer all of the resources that are used on every single page in your site — CSS, JS, images, anything else — in a single HTTP request at the start of the first visit to the page? This is what Resource Package support in browsers will let you do." Another resource packaging implementation but this suggests they'll actually implement this in FireFox. One issue with all of these is you can't use the resources from the package in any context that didn't ask to use the package for fear of security issues which means you can't stick the packaged resources in your HTTP cache. The package itself could go in the cache which would mean multiple packages per page or all your page's resources in one package. Of course the same security issues are a concern for all of the packaging proposals if a site has any way to inject into the source the request for the package. It'd be a similar vector to the UTF7 XSS issues but much worse attack.

2009 Apr 23, 2:22Review of mime sniffing based XSS attacks with recommended protections for both web sites and browsers. Also, surprising to me since I rarely see it in this sort of a paper, thought and stats on the compat. affects of their recommended changes for browsers. Very happy to see that in there!